iRig As My Rig? 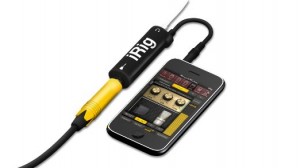 The iRig from IK Multimedia is a compact plug that fits in the 1/8″ headphone jack of an iPhone with a 1/4″ input for your guitar and another 1/8″ output for headphones or other devices.  Along with this plug, you need the iRig app, which comes in a simplified, free version, or and expanded selection of amp and effect pedal models for $19.99.  You can also make in app purchases for specific amps or pedals. The app also works on iPad, and iPod Touch, if that’s what you have.

Being the poor college student that I am, I opted for the free version.  The free app, without any additions, requires a minimum of 270 MB of space, so you might have to delete a few cat memes to make space.  This version comes with one amplifier model, two microphones (which are used on the amp), a distortion pedal, a delay pedal, and a noise filter.  There is a looping drum track (Which I have not used yet), and a recording option, where you can record your guitar and effects you have selected. 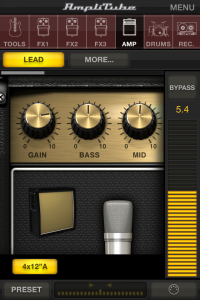 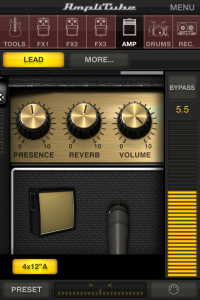 On the iPhone, the amplitube controls can be scrolled between and manipulated on the actual knobs on the screen (good luck), or select the knob you want, and use the slider on the right side.  If one were to use an iPad, the whole amplifier would be displayed.  It would be the same with the effects pedals. 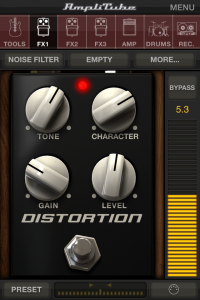 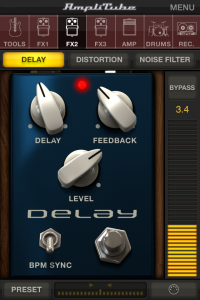 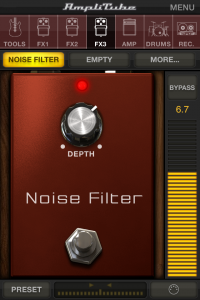 On the iPhone, only one at time is displayed.  The controls work the same way, either by knob or slider on the side.  Up to three effects can be used at a time, and since I only have three, those are the ones I use.  The distortion has a very basic, versatile sound to it.  As you can see from my settings, I have the gain fairly low (there is also gain on the amp) to get a more overdriven sound, rather than a dirtier distortion.  The delay acts as a standard analog delay (but of course, it’s digital), but there is also a switch that you can turn on that will match the BPM from the on board metronome (which can be found in the Tools bar, and you can tap a tempo).  The noise filter is almost essential to using this app.  It does have quite a bit of noise (Distortion not withstanding) and hum if you do not use it. 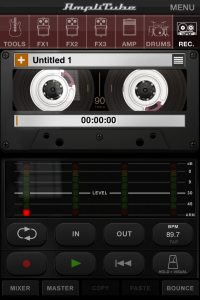 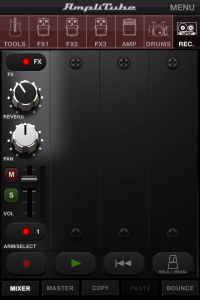 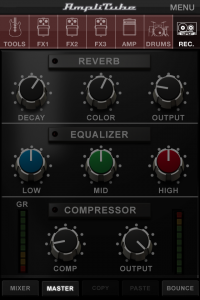 The recording section has multiple screens within itself, the main recording screen, the mixer screen, and the mastering screen.  The audio files you record can be exported, or you can import files to learn songs, etc.  Now, in the spirit of full disclosure, I have only recorded on short little tune.  Which leads me to my first story about the iRig…

I had been messing with the sounds and effects for a little bit, and I had a sound that I was liking.  So, I thought I’d test out the recording function.  I recorded a few scratch tracks, just to get the hang of it, then made a longer recording.  I listen to the track, it sounds pretty good! I go back to playing with the app, and… it’s strictly bypass.  It’s still making sound, but all the effects I was using were just gone.  I checked everything I could think of! The tuner, the metronome, the output,  the input, the amp volume, the pedal volume, different head phones, 1/4″ cable, none of it made a difference.

I finally capitulated, and used the help button on the menu, and send IK Multimedia an email, explaining what my problem was, and what I had tried to do to fix it.  Within 24 hours, they had written me back with several suggestions as to what my problem was.  If you look back at the picture of the Mixer screen (The middle one), you may notice a tiny little red light at the top, left hand side of the screen labeled “FX.”  Apparently I had accidentally brushed this and muted all my effects.  Total user error.  However, the response time of IK was admirable and helpful in helping me fix my issue.

So, why is this little device worth looking at? For a practice amp?  It’s small size and portable, and most people have their phones on them all the time anyway.  Is it inexpensive? Certainly, compared to some effects processors, and it is able to be expanded.  What do I find most useful? Redundancy! Not nearly as cool of an answer as  you thought it was going to be? Let me explain.  This week, I’m playing in a musical for a local high school.  I took my guitar rig, and left it at the school, because I have enough equipment that I don’t want to lug around everyday for rehearsals and show.  But, I’m also playing at my church this weekend.  What should I do? Bite the bullet and pack up after the show to go to church, just to set up, play, and tear it down again to back to the school?  I guess that’s what I’ll have to do… *sigh*… but wait! I know, I’ll use the iRig!  Using the iKlip (also available from IK Media), I strap my phone and iRig plug to a stand, plug it into the P.A. using a stereo cable, and just like that, I have (almost) the same sound!  Is it perfect? Of course not.  I don’t have near the same control as with my normal set-up, nor as good of sound, but most people won’t notice a difference.

As the saying goes, “one is none, and two is one.” I feel that the iRig’s greatest use is as a back-up/supplement.  It’s small enough to go in a gig bag with the stereo cable in case your amp goes out, or to be used in places where space is tight, or a friend who you didn’t know was coming shows up to play, and needs an amp.  It gives you options and allows you to be creative.  On a budget!

It’s also just a cool little piece of gear! Click here to get your own!  http://www.jazzbooks.com/mm5/merchant.mvc?Screen=PROD&Store_Code=JAJAZZ&Product_Code=IRIG&Category_Code=#.VBNclGNApjc

Thanks for reading! As always, please check back for more posts.