Jamey Aebersold came to Indiana University Southeast to treat the music students and faculty to a miniature clinic over the lunchtime hour.  This event was free, and open to  the whole campus.  For my part, I told everyone I knew on campus that they should come. And they did.  Both of them.  Even though the turnout was low, I thought it was fantastic.  Jamey came out and said, “This reminds me of a joke.  A friend asked me, ‘why did you go into jazz?’ and I replied, ‘well, it wasn’t for the crowds!’ The people who were there laughed.

The reason I mention the turnout is to encourage everyone to come out and experience one of Jamey’s clinics next time that you get a chance.  They are musical, historical, and certainly entertaining!

As a reader, who may not have ever seen or been to one of Jamey’s clinics or shows, you might be wondering what was so great about this particular hour long concert? It’s just jazz right? On the contrary, it’s much more than that, and I’d like to tell you about it. 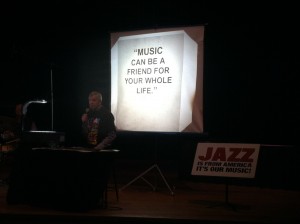 After Jamey introduces his band, Steve Crews on Piano, Butch Neild on Bass, and Jonathan Higgins on Drums, (Obviously, Jamey Aebersold on Saxophone), he has them start a blues in C.  He gets out his microphone and starts to put up slides on his overhead projector.  This slides range from pictures of famous jazz players, (he would then talk about that player), musical maxims or tidbits of wisdom, (such as “Music Can Be A Friend For Your Whole Life”) or musical examples, (actual written music).

Jamey talks about what they are doing, playing a repeating blues pattern, and explains what you need to improvise, and how natural it is.  To show us this, he starts scatting. 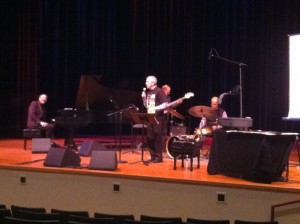 “I don’t know why we’re not all singers!” he declares.  My face becomes rather dubious at this point, but that’s a long story. He explains how the free flowing, improvised scat singing comes from the right side of his brain, the creative side.  “But when I pick up my horn, the left side kicks in because I have to start thinking about fingerings and the like”. He has a lovely slide for that, too. 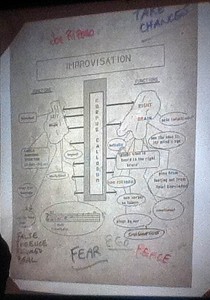 It’s hard to tell from the photo, but it goes into great detail about how each side of your brain contributes to music making.  Immediately after saying this, he jumps up, grabs his saxophone, and goes into an improvised solo with his group.

Next Jamey introduces a tune that he wrote called “Smooth As Silk,” and the band plays the tune.  Each member takes a solo, and Jamey encourages everyone to clap at the end of each solo.  For those of you who don’t know, IUS is much more of a classical school than a jazz school.  Most students are used to waiting until the end of a piece, not even clapping between movements.  It’s pretty intense for classical kids to clap that much.

Jamey and his friends play us a few more tunes, varying in style, speed, one he started by himself, and one he played with just Steve (The piano player).  At one point during “Autumn Leaves” Jamey goes back over to his overhead projector and puts up the lead sheet.  He points out each chord in the song as they play along so we can visually see where they are in relation to the lead sheet.

He tells us a few more stories from his earlier days in the jazz world.  I would try to repeat them, but I feel I would rob them of their humor and intimacy in Jamey’s storytelling.

Finally, where would we be without a whole-hearted crusade against smoking from Jamey Aebersold? He gives a short speech about how many jazz musicians tragically died young from substance abuse, be it smoking, drugs, or alcohol.

Kicking up one last tune, Jamey invites anyone who has further questions to stay afterward and talk to Jamey or the band members.

If you ever get the chance to go see Jamey play, or attend a clinic or class, I highly encourage you to do so.  It is fun, it is entertaining, it is instructive, it is good music, and a great time.