How Far Are You Willing To Go To Play Professionally?

In an era when modern tastes and technologies are undermining live entertainment at an astounding pace, today’s jazzer needs to be more adaptable than ever just to get by.

One day in the early 1980s, I got a call for a gig. The sweet young voice on the other end of the phone shyly asked if I could play with a pianist for a couple hours for her wedding. It sounded pretty standard.

“That’s wonderful. Can you play flute?”

Primarily a saxophonist, my flute chops were less-than stellar, but what the heck, it would be a challenge.

“Sure, I can do that” I said with some hesitation.

“Wonderful, now… I have some Elton John songs I’d like to hear – a whole set if possible. I have sheet music.”

This triggered a somewhat queasy feeling in my stomach and I thought to myself what am I getting into here? Maybe I should consider bailing on this one.

“Bring what you have and we’ll do the best we can”, I replied.

“My fiancée and I met while working at a charitable event. We were both dressed as clowns. Can you wear a clown outfit?”

“I’m not sure I’m the best guy for this job. I think you’d better call the union.” I politely gave her their number and hung up; my artistic integrity intact and untarnished.

Had that call come today, I would have been noting in my calendar, “6 p.m., bring floppy shoes and green wig.” 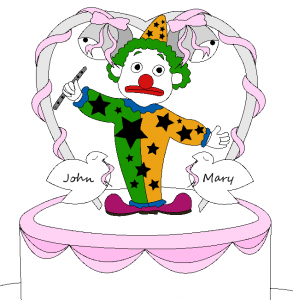 10 years later, I was playing a one-nighter on a popular Mississippi river boat that catered mainly to retirees (or in this particular case, the parents of retirees); one of those lazy Summer river cruises where TAPS could be heard every 10 minutes followed by a loud splashing sound. After our one-hour set with an appreciative audience, the house band began setting up to take over for the evening. Since we had a couple of hours to kill before escaping at the next dock, we decided to hang around and see just how lame the house band was. After all, it was a less than plush iron mud hopper, distinctly bereft of any of the luxuries you’d expect on a “real” cruise ship. “I’ll bet the band is the captain’s son-in-law’s country band” I thought to myself. “This should be gooood!”

Then, as they filed onto the stage, I recognized someone – the trombonist. He was a nationally well-respected musician who had played and recorded with everybody; the consummate “musician’s musician,” and everyone in the band could flat-out play! At the break, I asked how they ended up in – well, this place – he simply said, “Hey, it pays the bills.”

Hardly lacking evidential experience, I submit one more – a shorty:

Sometime later, I was playing a festival when I spotted a very non-Latino lead trumpeter I knew from College, playing in a make-shift mariachi band. He was sight-reading from a book and quite smartly attired in a rented outfit, complete with sequined white pants and a tasseled sombrero. Not able to resist, I quipped “Nice outfit.” 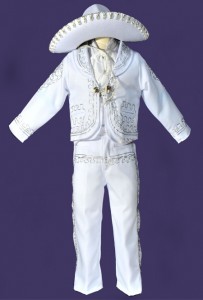 Indeed, “a gig is a gig,” and to be a working musician today means taking the work that’s available, not the work you want to be available. The “joy of music” has become the “joy of playing” and, in particular, the joy of getting paid to play.

Except for a very few elite players (and, umm… yeah, I’m not one of them) it’s a standard assumption these days that a musician must oftentimes leave his or her artistic statements at the door (or boat ramp) and be prepared to take anything that comes along. Or stay home.

The desire to work in ones’ preferred musical idiom has been taken off the table as a possibility in most cases, and the only thing that fills the void and keeps a lot of us going is the joy of playing our instruments, regardless of genre or venue. In many ways, we have become the proverbial choice-less beggers.

While crossing-over into other musical styles is hardly a new phenomenon, the necessity of doing so to maintain steady work is. This new generation of players knows very well that the opportunity to play at all is better than…well, not playing at all. They know that they can’t always pick the style or venue, and they are much better prepared musically and mentally for whatever comes their way. They have learned that there is usually (with some caveats, of course!) some amount of musical pleasure to be derived from nearly any musical situation. It’s always a challenge to play well, no matter what you are playing.

So, are all those music lessons and years of high-powered education wasted when you gig with a 3-chord blues band? Of course not. Where do you think you got the ears and facility to play 4 hours of blues in E? Same goes with country bands, ethnic bands, wedding bands, etc… If anything, a jazz education prepares you for anything and is therefore never wasted!

Armed with a jazz background (and chameleon-like stylistic sensitivities), today’s jazz player’s can competently hear and play almost any style of music, making them musical omnivores ready to devour whatever gigs come their way.

And It Doesn’t Stop With Just Playing

To stay exclusively in the jazz arena, top tier jazzers have crossed over (or, more like “crossed across”) into the educational realm with clinics, websites, videos, online lessons, etc…. With jazz clubs drying up, internet piracy, and other modern challenges, it’s the logical direction.

Many lesser-known players are joining in as well, with fully functional websites and youtube videos of varying quality, ranging anywhere from really bad to pretty darn good (but that’s a subject for a future post). With the field getting so crowded, is it the “wild-wild-west” or a new “jazz age”? 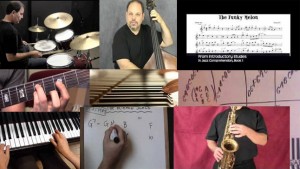 So, the next time the audience yells “Yakety Sax!” don’t say “Not on my ax!” Even though it does have a nice rhyme to it.